Thank you to our guest writer… Nomi Berger! 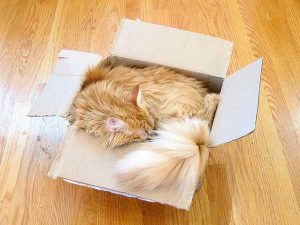 The feline world’s worst kept secret is out — cats are crazy about cartons. From snug shoe boxes to capacious cardboard containers.

If the question regarding this curious obsession is “why?” the answer is twofold: warmth and security. Not only do all things boxy provide cats with calm and cozy places to sleep off and on throughout the day and night, but they also offer them shelter from domestic “predators”, whether it’s a peeping Tom, a nosey Parker’s dog nose or an unwelcome amorous advance from their owners.

So fascinating is this feline fascination that it has been the subject of several studies in several countries.

Working with a Dutch animal shelter, researchers at Utrecht University in the Netherlands divided 19 cats into two groups and gave one group access to a variety of confined spaces. The result? Stress levels decreased significantly in the cats that were able to relax in boxes. Why? Because, in the wild, these small spaces would have been their “go to places” whenever they felt threatened by other animals.

To quote one of the researchers, “Hiding is a behavioral strategy of the species to cope with environmental changes and stressers.” In other words, most cats would rather flee from their problems than face them face on.

According to a National Research Council study, the thermoneutral zone for a domestic cat is 86 to 97 degrees Fahrenheit. This, then, is their “comfort” zone, where they don’t have to generate extra heat to keep warm. But the thermostats in most homes are set closer to 72 degrees Fahrenheit, and because cardboard boxes usually consist of multiple layers, they make ideal insulators for shivering cats trying to keep out of drafts.

And so, mystery de-mystified. Boxes are, quite simply, insulating, stress relieving cubbies where cats can hide, relax and sleep. They are unspoken meows to their concerned and caring guardians that mean either “Keep Out” or “Turn Up the Heat.”